We find ourselves in a historic period where US colleges and universities as a whole, and many of the students enrolled in them, are academically adrift. In this context, many of today’s college students graduate with little more than their own optimism and a diploma to sustain them in a quest to become independent adults. Aspiring Adults Adrift, the much-anticipated follow-up to Academically Adrift, documents approximately a thousand recent college graduates’ successes and hardships, and the extent to which post-college outcomes are associated with collegiate experiences and academic performance.

Despite having successfully completed four-year college degrees, many of the graduates are struggling to transition into traditional adult roles. Two years following on-time college graduation:

Surprisingly, in spite of these difficulties, today’s graduates express high levels of satisfaction with college and are optimistic about their futures. Two years following on-time graduation:

Difficult economic conditions associated with the 2007–2009 recession are partially to blame for these lackluster post-college outcomes, but they cannot explain everything. While some graduates are unemployed, underemployed, and economically struggling, others are flourishing. Coauthors Richard Arum and Josipa Roksa find that in addition to choice of college major and selectivity of institution attended, better performance on the Collegiate Learning Assessment (CLA)—a measure of critical thinking, complex reasoning and writing—is associated with a lower likelihood of early-career unemployment, underemployment, and job loss. These labor market outcomes, in turn, are associated with other transitions, such as independent living arrangements and financial self-sufficiency. In light of these findings, Arum and Roksa argue that colleges and universities need to enhance academic rigor and assessment to improve student learning outcomes and support graduates’ early life-course success. 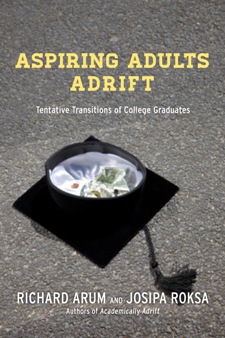